I had made myself a Halloween Quilt a while ago.  Not quite sure when I finished it or why I never posted about it...will have to remedy that in the New Year.  Anyways, my sis commented that she liked it and I just happened to have some extra fat quarters left!  I decided to try my hand at a zig zag quilt from Crazy Mom Quilts﻿...and here's the result! 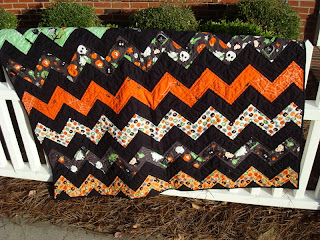 I'm lucky that my sister's birthday is in October...so it was perfect timing!  It got sent along a little after her birthday...but before Halloween! 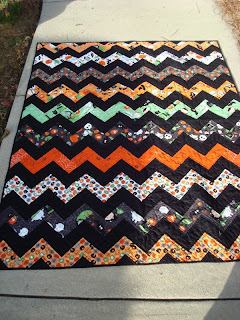 I did a straight-line quilting following the zig zag pattern and was happy how it turned out.  I found the backing for 50% off during a sale - so that made me happy too! 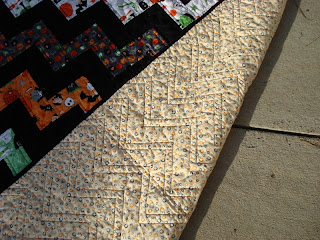 As we round the corner into a different holiday...wishing everyone's family a Merry Christmas and Happy New Year!
Posted by Gnomemade at 4:15 PM No comments:

A former colleague welcomed a baby girl into the world right around Thanksgiving.  Surprisingly, this quilt was actually finished before the little one was born. Nothing like a baby shower to provide a deadline, right?  This one was finished up right before the shower in October.  Mom's a girly-girl, so I figured I couldn't go wrong there!
The pattern is "Due Date" and the fabric name escapes me right now.  I was most proud that all the fabrics came from my stash!﻿ 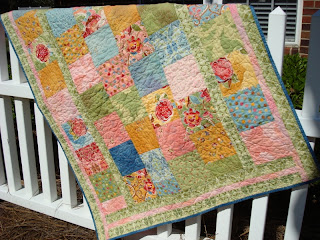 I think Mom liked it and hopefully baby does too! 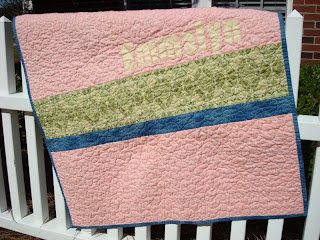 It got wrapped up along with a rubber ducky (not from my stash) and delivered at a lovely shower hosted by the mom's sister. 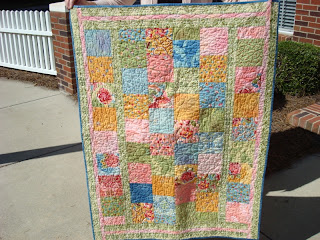 Mom and baby are doing well.
Posted by Gnomemade at 7:24 AM No comments:

May the Force Be With You...

Mr. Gnomemade and I have been very lucky to develop some great friendship with my co-workers.  We call them and their spouses very close friends.  One couple - whom we've known for over four years now - a great people with some very big passions - Star Wars for him and Wizard of Oz for her.  They welcomed their first child into the world in August 2011, so when it came time to celebrate her first birthday, I wanted something fun.  Cue a web search and the wonderful find of these Star Wars finger puppets!  It was a no-brainer that I needed to purchase the pattern and make them!
I think it actually took me longer to find the right color felt (especially for C3PO and Yoda's face) than it did to make them.  Granted I did burn myself with the hot glue gun a couple of times, but well worth it in the end.
﻿ 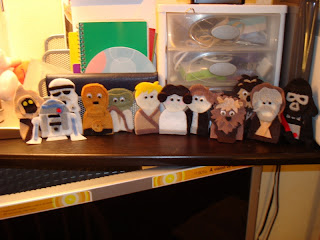 Overall, I think they were a hit.  Dad seemed to love them...while the birthday girl was more interested in the tissue paper. 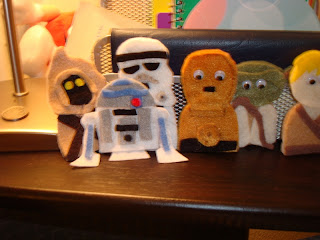 They may be a little old for her, but hopefully she'll grow into them and they're a good way for dad and her to share one of his greatest passions! 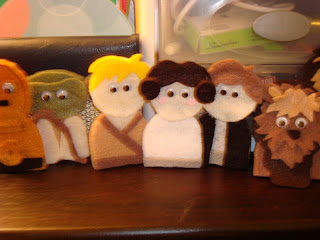 And if nothing else...who wouldn't want to put on a Darth Vader finger puppet and say..."Luke...I am your father."
Posted by Gnomemade at 8:01 AM No comments:

Welcome to the World!

My blog has been quiet since June because...well, because it's been a whirlwind around here.  Since June, I've changed jobs, Mr. Gnomemade and I  have moved, we've taken a vacation with my parents and sister, hosted Thanksgiving for Mr. Gnomemade's family, and lots of everyday life things in between.  All of these have been great opportunities/experiences, but we're enjoying our first real weekend of "downtime".  I realized my blog has been sorely neglected, as has my sewing machine.  But, we're hoping that's going to chane now that we're a bit more settled.  We're hoping that 2013 will be a much more calm year.
While it's been failry quiet in the world of blogging and crafting, I did accomplish a few things in the latter portion of 2012.
First up...a baby quilt for my best friend's baby!  He's their first and we welcome him into the world in late spring.  They said they were decorating in browns, greens and blue - so I ran with that theme.  Not my best work, but hopefully they know it was made with love.﻿ 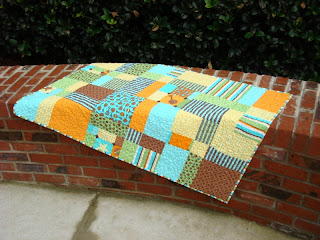 The little guy shares a name with Mr. Gnomemade, which made welcoming him into the world even more special. 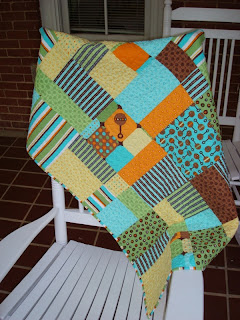 Unfortunately, they live many hours away, so I have yet to meet him...but hopefully soon! 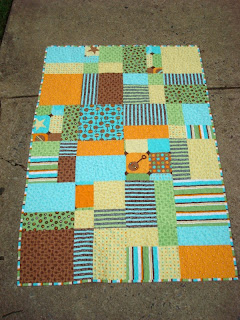 Will be back with more 2012 finishes!
Posted by Gnomemade at 6:24 PM No comments: