Over Spring Break, I happened to stop by our local Habitat for Humanity Re-Store. Mr. Gnomemade and I have been using one of our kitchen table chairs as a desk chair, so when I saw this chair sitting there for $5, I couldn't resist! 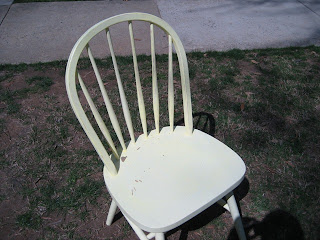 Now, it was in a little bit of rough shape - some light yellow paint that was chipping, peeling and not very event. But, I figured, we had some time off from work and it was a beautiful weekend, so we'd try a little re-finishing project. 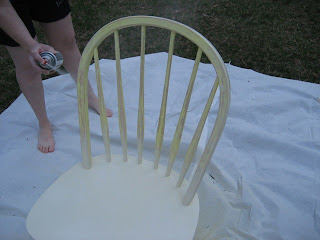 A quick trip to our local hardware box store for some sand paper and spray paint (and then a second trip for some more spray paint) and we got to work! 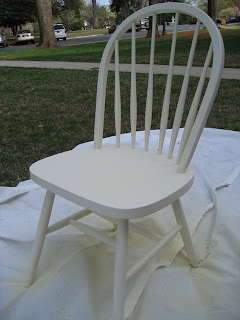 And here it is in all its finished glory. It went from a light yellow to a pretty ivory color. Now, I'm searching for the perfect seat cushion and we should be all set!
Posted by Gnomemade at 10:00 AM No comments:

I Can Hardly Believe It Myself!

So, when I started my personal UFO challenge a while ago...it was one specific quilt that I had in mind that I really needed to finish.

Now, I've only been quilting since 2005/2006, so I don't have a ton of UFOs that have been hanging around for a long time. But, this one...well this one has been almost four years in the making.

After Mr. Gnomemade graduated with his Master's, we accompanied his parents for a 2+ week to Italy. I had never been, and it was a wonderful experience. We had the chance to visit Florence, Sorrento and Rome, along with areas all around those three cities. We had a great trip, and I was greatly appreciative to his family for the opportunity for such a great trip.

Mr. Gnomemade's mother had subtlely asked a couple times about me making her a quilt, and their house is full of photos, so I figured that would be the perfect marriage...hence this quilt was born. 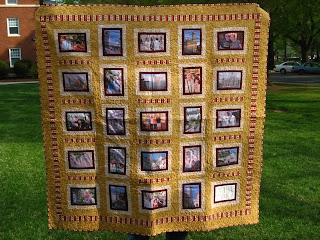 Now, it's been a labor...mainly of love, but I'd be lying if there weren't times I just wanted to throw this out of the window. First, it was about trying to pick out which photos I wanted to use. Now, that shouldn't be too hard - but Mr. Gnomemade is the quintessential tourist, and I think we have about 900 photos from our trip. Then it was onto designing the layout. Then, I had to figure out how to print photos onto fabric...and that was an ordeal for quite a while. Some of the printer photo fabric worked well...another package of it...not so much. Picking the rest of the fabric wasn't too hard - my now Mother-In-Law loves gold and burgundy. 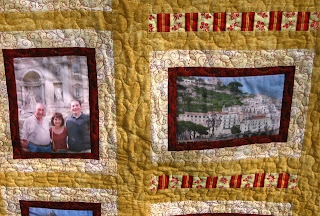 So, it went for about 3 1/2 years. I'd pick it up, then put it back down. Sew some more, get frustrated and then put it away for a while. I really worked on it ine arnest over the past two years, especially once I found the perfect backing fabric. 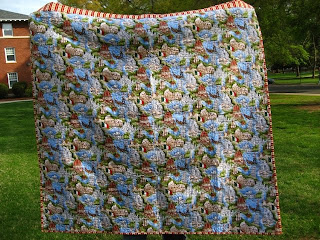 I mean, isn't it perfect? It's a fabric of major Italian landmarks. We had seen quite a bit on our trip and I thought it was great. 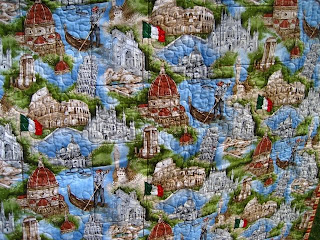 The rest of it eventually came together and I finished up the binding in March. Yup...March of 2011. We went to Italy in June of 2007. Don't judge too harshly.

It was hand delivered to my in-laws in April when we went up to see them for a wedding of a close friend.

They seemed to like it and I'm just happy to cross this one of the list - and that it made it through the washer.
Posted by Gnomemade at 5:50 PM 2 comments:

Happy Easter! Hope your day, however you choose to celebrate, is a wonderful one.

Our ham is in the oven and the Macaroni and Cheese is prepped.

We have several of my students coming over for dinner tonight.

And we thought it'd be nice to give them some small Easter baskets. 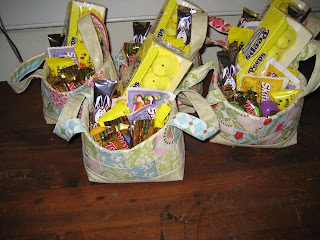 Who doesn't love some tasty candy? 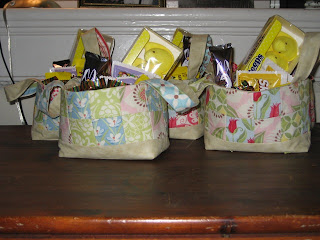 And the baskets are handmade by me using the Pink Penguin tutorial!
Posted by Gnomemade at 4:11 PM No comments: