My next project has been basted and is just sitting on the guest bed staring me down...just daring me to start it. And, I...well, I am a bundle of nerves about it!
Now, I've quilted every single one of my projects thus far...but for some reason this one scares the heck out of me. I recognize that my skills aren't great, and I'm not going for perfection, but there's something about this most recent project that makes me anxious.
Perhaps, because it's my first baby quilt from a pattern? Or from designer fabrics?
Or maybe it's because I finally figured out how to make my little Kenmore sewing machine complete some machine applique!
I mean...I really think this owl is adorable and I'm worried my wonky free-motion quilting skills are just going to mess him up. 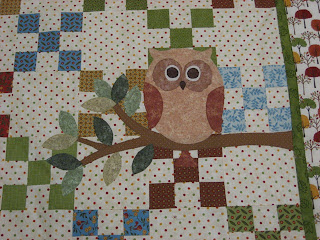 But, the baby is due in August (fairly far off still, I know), but we've got a baby shower planned for mom in mid-June - so it needs to get done! I just need to work up some courage, and to stop stalling by posting about the quilt.
Anyways...I took a photo of it just in case it doesn't make it through this process gracefully. 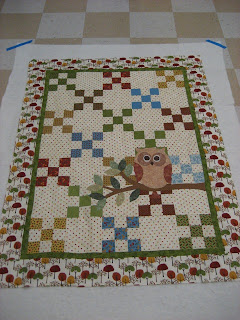 Well, after about five years, I finally finished what should be considered a relatively quick and easy project.

I saw the pattern for these pillows in a McCall's Quilting - August 2006 issue. It was a pattern by Jean and Valori Wells - who as a new quilter I didn't really know. Now, I'm a bit more in the know and hold these two women in high admiration for their patterns and fabric. 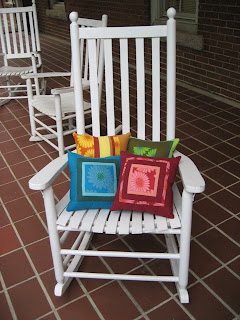 Anyway, in 2006, I was living in a new furnished apartment that came with a very "interesting" black leather couch. It was possibly the most uncomfortable piece of furniture I've ever sat on. But, I thought the room could use a bit more color, so I went ahead and ordered the kit (the first one I ever ordered) and started working on these pillows. 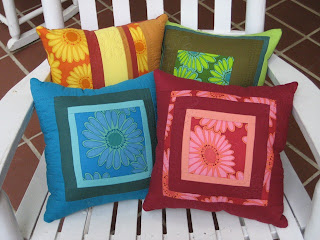 I have no idea why it took me five years. But, it did and I finally finished these in April! I love how they came out and while I no longer live with that ugly, awful couch - they do happen to match the duvet cover in our guest bedroom/sewing room. So, now they're cheerily sitting there. 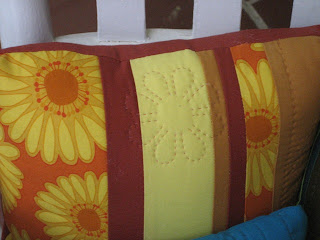 I did do all the quilting by hand - so maybe that's a reason I took so long? No? Not buying it either?
Posted by Gnomemade at 4:50 PM No comments: